The idea behind Tabula Rasa is to propose an open “school”, a “reconnected” school which revisits the notion of teaching at a time when educational structures are becoming more and more rigid, more and more thought of as the affair of specialists and built on a unique model, conveying the idea that the world is divided between experts who “know” and the ignorant masses.

Kom.post is based on an alternative vision which promotes the exchange of practices ; everyone is considered as possessing specific knowledge and as capable of receiving the knowledge of others. Each interdisciplinary meeting requires a process of “tabula rasa” where a room, an “in between space” is created in order to welcome and evolve with the unknown, in a collaborative process of intertwined discoveries. A progressive and collective writing, based on renewed and shared learning, becomes thus the only text left at this intense and ever-evolving table.

In this way, kom.post builds a relationship with the spectators who are considered as essential collaborators, as ephemereal companions on a road that appears progressively with each individual step of this common movement. This is where artistic and sensitive experiment appear and this is where we would like to “set the table” during Tanz Im August.

In a dance festival which is a time for choreographic and live propositions, what could be more common than the idea of the body? It is everywhere but never treated in the same way, never contained in one single idea, never entirely possessed by anyone and excluding any notion of “specialisation”. It is a multiple entity which demands a multiplicity of approaches, of watchers as well as practitioners: which is precisely what an open school is all about!
Under this umbrella and during the whole festival, different classes will be given in relation to the notion of body/bodies (not only the physical body but also the political, the imaginary, the scientific body…). The “teachers” of tabula rasa are not only choreographers or dancers participating in the festival (who can decide to switch places and become a student) but also anyone who would like to share his or her specific body knowledge or practice, in the way that he or she chooses to connect it to the idea (utopia?) of new ways of transmission. The content of each lesson will determine its form, which can be a workshop, a one-to-one conference, a collective walk….The invention of the format will continue to evolve throughout the two weeks of the festival and will be celebrated by a special event : Around the table. 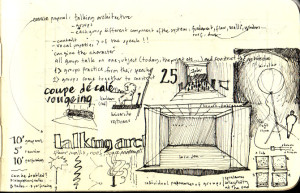